than a year is what we had with her. 8 rounds of chemo and she was doing well. Then Cancer came back in the summer of that was just too much for her. Our family is devastated by this huge loss. Maddy brought so much love into our family.

Innovative, Creative and Slightly off center 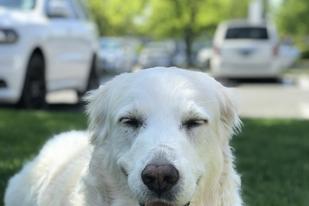 Dealing with cancer is always horrible, in my case it wasn’t me, it’s my dog. I kept the tense present as I sit here with her by my side recuperating. She finally came home yesterday after a prolonged stay at the hospital. I had visions of having to carry her and teach her how to walk again.

The only way to stop this cancer was to amputate. So barbaric we’d never consider such a thing for humans, but in dogs, its the best way to stop the cancer. Madison has been in our lives since 2012, a rescue, who’s love and dedication has changed our lives forever. She was the picture of fine health for many years. Madison always enjoyed her walks with her father and her father always enjoyed his walks. Even when it seemed she wanted to sniff every blade of grass, or have to go meet anyone who showed interest in meeting her. She’s a spooner and a leaner as she loves to be loved.

Two plus miles every day our love for each other could never be matched. So you can see how hard it hit my family when what we thought was just a strained muscle
which caused her limping turned out to be OSteosarcoma, bone cancer. According to the Vet, its quite common for larger dogs. The day of the diagnosis was of course something you never want to hear or be prepared for. The vet knew even before his X-ray what is was most likely.

I am sure my faced reflected the news in white ash. The doctor thriving in a small practice gave me the news in the waiting room with all to hear. I was shocked, punched in the stomach left with no humility in front of other pet owners. I am not sure if they were as horrified as I was, but leaving that office, I wished never to return. The thought of amputating my dogs leg was just so foreign. I didn’t think at that moment I would want to do that to this wonderful beautiful dog who
gave so much to us all. It was either watch her die painfully or, take the leg , stop the cancer which we learned after another round of tests that it had not spread to the rest of her body. We chose to have our in our lives longer hopefully without cancer, but with only three legs.

After meeting with an oncologist she stated you’d be amazed how quickly they bounce back with only three legs. Can you imagine a human surgeon saying the same thing after losing a leg? He can hop, but I’d limit the scotch.....
The day we brought her home, after a second emergency service her stomach had gotten turned which caused , she was ready to get the hell out of the hospital. She wasn’t interested in hugging or leaning, just leaving. She was eager to go, ready out the door , hoping her way to the car. We rested after 20 hops or so, she was and we were ready to bring her home.

We’re not sure how much time we have with her, but I’’ll treasure each day as though its the last we will have her. It would have been unthinkable to know we could have we should have, we did. It broke my heart to know this may change her personality forever. Our next journey will be the cancer treatments, which are necessary to keep the cancer from taking hold of another part of her.